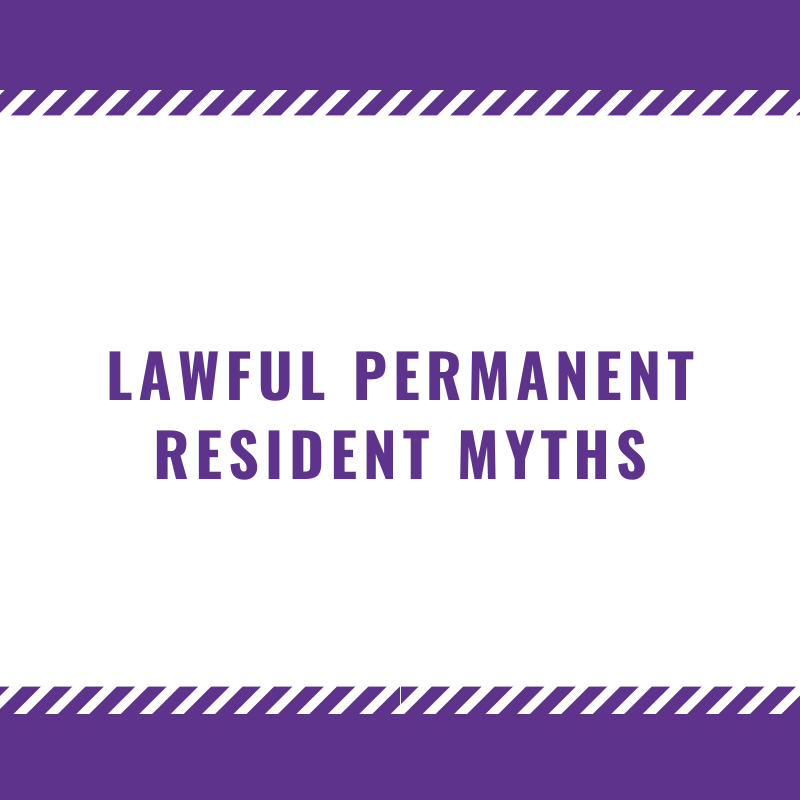 There are many misconceptions surrounding U.S. Lawful Permanent Resident status. For some, these misconceptions lead to issues when traveling or applying for citizenship. For others, they lead to unfounded stress. The root of confusion is found equally in the lack of information from immigration authorities and the misinformation disseminated from non-lawyers. Regardless of whether you’re being overly careful or carefree about your permanent resident status, you should know the facts. In this article, we will debunk some of the most common myths about U.S. Lawful Permanent Resident Status.

1. Myth #1: If Your Green Card Expires, Your Resident Status Expires

Most people panic when they realize they have let their green card (normally issued for 10 years) expire. Although you are required by law to keep your green card current by completing the Application to Replace Permanent Resident Card (I-90 form), the expiration of a green card in and of itself does not mean you are no longer a U.S. Lawful Permanent Resident (LPR). Upon becoming an LPR, you remain a lawful permanent resident unless and until your status is removed through “due process.” Due process generally means you are afforded a notice of the basis for removing your resident status and the opportunity to challenge the removal at a hearing (immigration court removal proceedings). The grounds for removing permanent resident status through a hearing include, among many others, criminal matters, immigration fraud, and national security.

2. Myth #2: Once You Are a Resident, You Can Travel In and Out of the USA Without Issues

Many U.S. lawful permanent residents feel a false sense of security about traveling. Unfortunately, becoming a U.S. Lawful Permanent Resident does not allow for travel without limits and conditions. A permanent resident is still subject to the Inadmissibility provisions of the Immigration and Nationality Act, section 212. What this means is that whenever you leave the country, Customs and Border Protection can essentially deny your reentry into the United States. You must, in effect, ask for “permission” to reenter the United States each time you leave. Reasons why you may be found “inadmissible” by Customs and Border upon attempting to reenter the U.S. include criminal, health, national security, and fraud-related grounds. Another possible reason for denying your entry is having remained outside of the United States for more than 6 months in any given trip without first seeking “advance parole” or a “reentry permit” through the Application for Travel Document (form I-131). The only way to be completely safe from scrutiny when traveling is to become a United States Citizen. The application for U.S. Citizenship is called the N-400, Application for Naturalization, and can usually be submitted after 5 years of becoming a lawful permanent resident (3 years for those who became LPRs through a U.S. citizen spouse).

3. Myth #3: As a Resident, You Can No Longer Be Deported or Removed From the USA

As you may have already gathered from the previous two sections, you CAN be deported or removed from the United States after becoming a resident. Although you have the right to argue your case in court, you may ultimately be removed for receiving certain criminal convictions, for remaining outside of the United States for an extended period of time (viewed as “abandoning” your resident status), for obtaining your resident status through fraud, and several other grounds. The relevant provisions for removal are Immigration and Nationality Act section 212 (Inadmissible Aliens) and Immigration and Nationality Act section 237 (Deportable Aliens). Note that the most common triggers for removal are travel and applying for citizenship. Before you do either, make sure you have nothing in your background that would place you in removal proceedings!

4. Myth #4: You Can Bring All of Your Foreign-born Family Members through Your LPR Status

While becoming a U.S. lawful permanent resident allows you to bring some family to the U.S. as “preference category relatives,” certain family members would not qualify through your LPR status. Permanent residents cannot petition for their siblings. Similarly, permanent residents cannot file an immigrant visa petition for their married sons or daughters. U.S. Lawful Permanent Residents can only file for their spouses and unmarried sons or daughters. It is important to also note that none of the LPR family members are considered “immediate relatives” under immigration law; the impact of the categorization as “preference relative” rather than “immediate relative” is that there is a wait list for preference categories as seen on the Visa Bulletin. This is because there is a yearly cap on the number of visas issued for preference category relatives, whereas immediate relatives have an unlimited number of visas available. Thus, in addition to the normal processing times for a family member’s visa application, a preference category relative must wait in line for a visa to become available. For some categories and countries, this could take 20 years!

This is perhaps one of the most dangerous misconceptions about Lawful Permanent Resident status. U.S. Lawful Permanent Resident Status is NOT the same thing as U.S. Citizenship. Voting as a non-citizen is a crime and can result in jail time as well as negative effects on your immigration status. Note that on the N-400 Application for Naturalization there is a specific question as to whether you have ever voted in any U.S. election. If your answer is “yes,” you should seek the help of an experienced immigration lawyer before continuing with the process.

The above 5 myths about U.S. Lawful Permanent Resident status are some of the most commonly uttered in our immigration law office in Wellington, Florida. Beyond the top 5, we are frequently approached with statements and concerns about LPR status that are far from true. And even beyond the myriad of false information out there about LPR status, we have seen and heard untruths about many other aspects of immigration law. Our wish from our staff here at Casanova Law, a Wellington immigration law firm, is that the immigrant community in Wellington protect itself by becoming informed. Contact Casanova Law today is you are seeking an immigration lawyer in West Palm Beach Florida or Wellington.