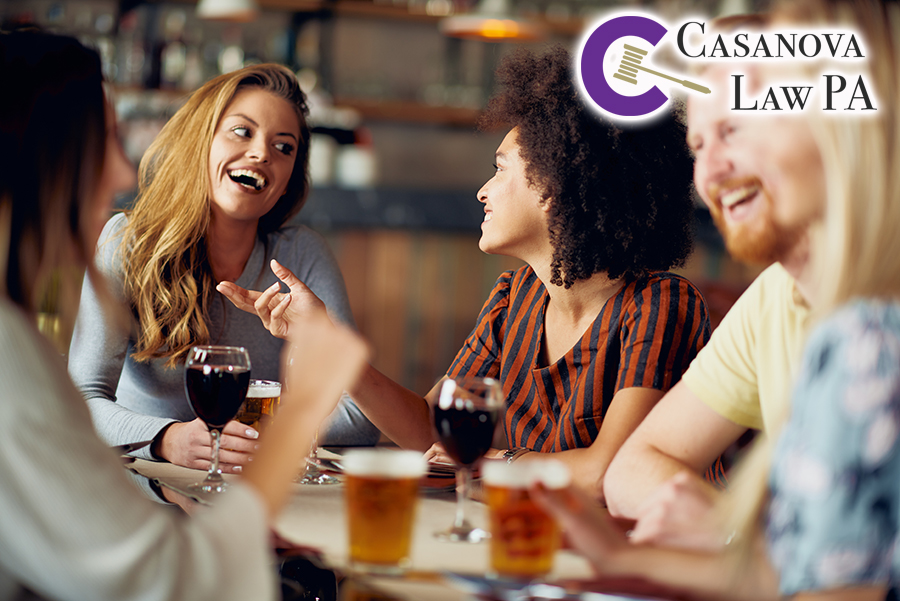 Oh, the joys of happy hour. The 2-for-1 deals, the socialization and unwinding have many regularly rushing off of work to make it to a bar or restaurant. Whether for networking, watching a sports event, or catching up with friends, the prospect of getting a few drinks after a long day is appealing. Add to this some clever marketing from venues – with cute happy hour themes such as “TGI Friday,” “Sunday Funday,” and “Thirsty Thursday” – and the seduction is complete. All too quickly you can be faced with an arrest for public intoxication.

The dark side of happy hour – where venues and friends make it easy to “just have one more” – is the risk of consuming too much alcohol. Overconsumption of alcoholic beverages on a regular basis could result in long-term health problems, including liver damage, memory loss, and addiction. From a legal perspective, drinking too much could result in a criminal charge.

Although most people associate the criminality of drinking alcohol with Driving Under the Influence (DUI), other crimes can arise from drinking to excess. The most common of these crimes is an arrest for public intoxication. For some people, having one too many can produce a change in behavior. We have all likely seen this before; whether at dinner or at a bar, we have witnessed a loud, incoherent and inebriated person causing a scene, perhaps displaying lewd or aggressive behavior. In most states, this type of conduct is considered criminal.

While states like Nevada, Montana and Missouri do not appear to criminalize public intoxication, the rest of the U.S. views public intoxication as a crime (typically a misdemeanor). In Florida, the criminal charge of public intoxication is memorialized in section 856.011 Florida Statutes, titled “Disorderly Intoxication.” As seen in the statute, Florida requires an element of either (1) endangering the safety of another person or property, or (2) causing a public disturbance, in combination with intoxication, to constitute a criminal offense. Upon violating 856.011, a person has committed a second-degree misdemeanor, punishable by a five-hundred dollar ($500) fine and sixty (60) days in the county jail. Additionally, three convictions for disorderly intoxication within a period of one (1) year triggers “habitual offender” status which allows a court to impose related treatment in addition to any other penalty.

In Palm Beach County, Florida – particularly at bars, strip clubs or downtown areas – cops are often called out to scenes of public intoxication. Upon arrival, a law enforcement officer will conduct a criminal investigation. For an arrest for public intoxication, this means determining whether a person is, in fact, intoxicated and whether that person is a disturbance or a danger to other patrons, employees, or other persons in the area. Much like a DUI charge, a police officer investigating a call for public intoxication can consider whether a person has lost control of his or her normal faculties from drinking too much alcohol. Slurred speech, stumbling, and passing out are all examples of conduct that may constitute intoxication. Upon a determination from a law enforcement officer that a person’s normal faculties are impaired by alcohol and that the person presents a threat to others, the cop will likely remove the person from the establishment and initiate criminal charges of disorderly intoxication either through a physical arrest or a Notice to Appear in criminal court.

A key component in any disorderly intoxication charge is behavior. This component is a dangerous one because it can only be described through perception. For example, an overdramatic complainant could call the police and accuse someone of engaging in “disruptive” or “threatening” behavior when the person’s conduct does not really rise to that level. This could result in an unjust arrest for public intoxication. Because of the crime’s element of subjectivity, one charged with disorderly intoxication should not simply give up and accept the “facts” as alleged by law enforcement in the probable cause affidavit. Instead, a person charged with public intoxication should do his

Another important component of an arrest for public intoxication is location. Most disorderly intoxication charges will require proof of acts committed in a “public” place. While this term is not clearly defined, the word “public” can mean “in open view” or “known to many people.” Again, one should not just accept the conclusions of law enforcement that an incident occurred in a public place. Instead, one should dig deeper into the facts and definitions.

Lastly, it should be noted that “intoxication” is subject to interpretation in the same way as behavior and location. Does the complainant or police know a stranger’s normal faculties? Normal faculties, with or without alcohol, differ from person to person. For instance, perhaps a person’s balance is normally off due to medical conditions; perhaps an accent or lisp is confused with a slur.

Due to the vague nature of the disorderly intoxication statute, there is certainly plenty to review and possibly challenge when it comes to an arrest for public intoxication.

At Casanova Law, we have what it takes to protect your rights in public intoxication cases. Leading attorney Lourdes Maria Casanova is a former prosecutor for the Palm Beach County State Attorney’s Office. Having handled thousands of criminal cases for the local prosecuting agency (of which many included public intoxication cases), Attorney Casanova is well-equipped to defend you in court. We are ready to fight for you in Palm Beach and Martin counties, including Wellington, Lake Worth, West Palm Beach, Jupiter, and Stuart.

Contact Casanova Law today to schedule a consultation for an arrest for public intoxication. (561) 236-5340 or info@casanovalawpa.com